Did you know that if you have way too many unpaid debts that creditors can take money directly out of your paycheck? It sounds illegal, but it’s not. Creditors garnish wages from thousands of Americans every year because they have too many unpaid medical bills, credit card bills, student loans, you name it. But the good news is that stopping wage garnishment is possible, especially with top-notch legal counsel. Many Americans file bankruptcy in order to stop wage garnishments, but there are other options too. Tuscaloosa’s top wage garnishment lawyer – Eric Wilson – explains this and more below.

If you’re crushed under the weight of your debt and you’re looking for a fresh start, look no further. We are a debt relief law firm that has extensive knowledge of bankruptcy law. Tuscaloosa wage garnishment lawyer Eric Wilson is ready to start an attorney client relationship with you today. Call 205-349-1280 to schedule a free consultation.

What is Wage Garnishment?

Wage garnishment occurs when creditors file a court order that instructs your employer to withhold a specific amount of money from your paychecks every month. This is basically a debt collection method. Creditors will continue garnishing your wages until your debts are paid off.

In order to legally garnish wages, creditors must sue you and win. Once this happens, creditors will have a default judgment against you that can last up to 20 years in many states. In some cases though, creditors don’t have to sue you at all before they can garnish your wages. For example, if you owe lots of money on student loans, back taxes, or child support, creditors (or the IRS) can begin wage garnishment without a court order.

How Much Money Can Creditors Take Out of Your Paycheck?

If you’re new to the world of wage garnishment, you’re probably wondering how much of your money creditors can take. Don’t worry, they can’t take your whole paycheck and leave you with nothing. There are federal limits for wage garnishments.

For the sake of understanding this concept better, here is an example scenario. After taxes and other necessary deductions, maybe you have $400 of disposable income every single week. 25% of $400 is $100.

The U.S. Department of Education can garnish up to 15% of your weekly disposable earnings in order to pay off your student loan debts.

In most cases, the Internal Revenue Service (IRS) can garnish up to 15% of your weekly disposable income in order to pay off back taxes. However, this limit can certainly vary depending on the number of people who are financially dependent on you and other standard deductions.

How Many Americans Endure Wage Garnishment Every Year?

A report from the ADP Research Institute states that more than 7% of the 13 million Americans that were surveyed suffered wage garnishment in 2013. The report also claims that more than 10% of Americans between the ages of 35 to 44 suffered wage garnishment in 2013. Half of the people in this age bracket owed child support money while the other half owed money for various consumer debts.

Which Sources of Income Are Exempt From Wage Garnishment?

Listed below are some sources of income that creditors can’t touch at all, no matter how much debt you’ve accrued over the years.

An experienced attorney, such as Eric Wilson, will work tirelessly to defend these rights on your behalf. 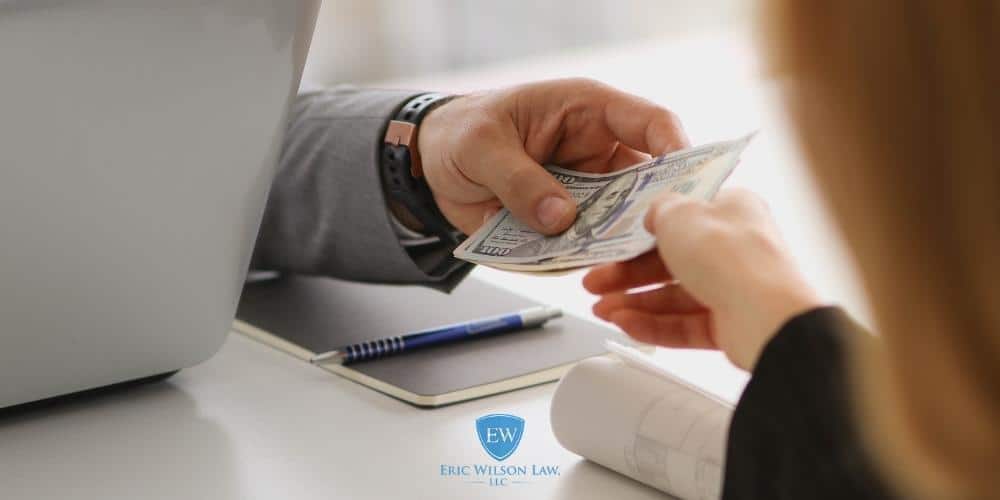 How to Stop Wage Garnishment

If you’ve received your first-ever wage garnishment notice, you may feel hopeless. But it’s important to remember that you have options to stop wage garnishments. Listed below are just a few things you can do in response to a wage garnishment order. Before you make a decision, it’s best to have an experienced bankruptcy attorney on your side. Eric Wilson will carefully review your financial situation and help you determine whether you should take legal action.

The first option is filing bankruptcy. Many people view a bankruptcy petition as a last resort and an “end-of-the-world” decision that can ruin their lives – and credit – forever. This is simply not true. When you file for Chapter 7 bankruptcy or Chapter 13 bankruptcy, you can pay off the majority of your debts in as little as a few months. Additionally, having a bankruptcy petition on your credit report for 7 to 10 years is a small price to pay for freedom from your debts.

It’s important to remember, though, that filing bankruptcy doesn’t stop all collection efforts. If you have high priority unpaid debts – such as alimony and child support – you could still endure wage garnishment once the automatic stay begins. Bankruptcy lawyer Eric Wilson will explain all this and more when you hire his legal representation.

Remember: one of your rights under federal law is that you can challenge a wage garnishment order, especially if it will cause you significant economic hardship. You can do this through a court petition. The attorneys at Eric Wilson Law LLC can help you determine if claiming economic hardship is the best option for you. Additionally, they can teach you how to formulate a persuasive court petition.

Let’s say your creditors fail to notify you about your wage garnishment order or they take more than the maximum amount mandated by law. If this is the case, you can file a complaint with the Consumer Financial Protection Bureau (CFPB) and potentially stop wage garnishments. If creditors have violated your rights, it’s always a good idea to hire a bankruptcy attorney to defend you.

Lastly, you could enter into a trusteeship with a qualified bankruptcy trustee. If you’re in a trusteeship, creditors legally can’t garnish your wages. This is how a trusteeship works: you pay a lump sum to your creditors through your trustee.

If you were recently notified through a court order that your creditors are going to start garnishing your wages, you have options. But it’s crucial to seek legal advice from our law firm before you make any decisions. Our team of experienced attorneys have extensive knowledge about the bankruptcy code and how it could possibly solve your debt crisis. Call 205-349-1280 to schedule a free consultation with Tuscaloosa’s top bankruptcy attorney – Eric Wilson.

Tell Us About Your Legal Issue